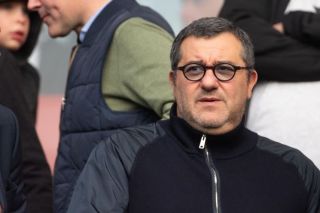 This could have implications for Paul Pogba.

Reports emerging suggest the FA have banned Mino Raiola as an agent in the United Kingdom until 9 August 2019.

Raiola was handed a separate ban from the Italian FA earlier this month, which will prevent him from carrying out any transfer activity made worldwide by the Chairman of the FIFA Disciplinary Committee, as reported by ESPN.

NEXT: Man Utd and Liverpool both make moves to sign £70m-rated Ligue 1 attacker

The Italian super-agent has enough contacts within the game to ensure Pogba is looked after this summer should an offer reach United from Real Madrid. They have intermediaries and greater entourages to take care of matters nowadays.

But it’s not the same as having your trusted agent working in your best interest — which may raise a few eyebrows, considering we are talking about Raiola.

Raiola's Italian ban being upheld in England by the FA could potentially affect Pogba's status this summer. That said, I'm sure they'd find a way around it if Pogba was that desperate to leave #MUFC.

Sir Alex Ferguson wasn’t a fan and United stopped signing Raiola’s clients for a number of years. Then, Ed Woodward stood into the role of executive vice-chairman and they started working on deals again.

Whatever it is Raiola has been accused of we don’t know, but it must be serious if another Football Association has acted in such a way against the Italian agent.

Meanwhile, The Express reported on claims that Pogba to Real Madrid is ‘practically done’.

Up until now, the ban Raiola has in Italy meant he couldn’t conduct any deals with Italian clubs. Now they’ve added the Premier League to make a short list of countries he can’t operate in currently.