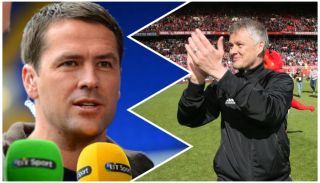 Michael Owen believes the proposed clear-out at Manchester United will take a long time but still backs Ole Gunnar Solskjaer to rejuvenate his squad with young hungry players for next season.

The former United striker passed comment on the rebuilding process Solskjaer has no other choice but to kick-start. He will certainly hope it’s still him in the job when it’s the squad makeover is successfully completed.

United fans have been checking the gossip columns, trying to figure out who the club is trying to sign this summer, but the Reds are linked with everyone all year round.

NEXT: Lukaku told he can leave Man Utd with two Serie A clubs chasing striker

I get the excitement factor from the transfer window, however, it seems wasted on the amount of BS that gets published each summer.

But speaking to Press Association Sport, as quoted by Manchester Evening News, Owen warned: “It’s quite hard to get rid of more than three or four players in one window, particularly if you want something in return.

“I thought I had a better handle on United in that I believed they were a better team than they had shown under David Moyes, Louis van Gaal and (Jose) Mourinho.

“I still think the players are better than that but the squad obviously needs some surgery and it won’t be easy without Champions League football next season – great players want that. So I just don’t think it’s realistic that they’re going to be able to make 10 changes in one summer.”

Owen’s right – but nobody expects United to get that much business done in one summer.

We spent last summer dicking around about a centre-back and signed none. If only Ed Woodward got that much done a year ago, we wouldn’t need as much work done to the squad now under a new manager.

The BT Pundit believes that Solskjaer will blood more youngsters next season.

He has already given opportunities to Mason Greenwood, James Garner and Tahith Chong.

“One thing I’m sure we’ll see next year under Solskjaer is a big push on youth,” Owen added.

“I expect we’ll see four or five of their talented youngsters step up from the academy and I think one of two of those could go on to be proper Manchester United players in the future.”

Moreover, Solskjaer has a plan to get rid of United’s deadwood, as per The Sun.