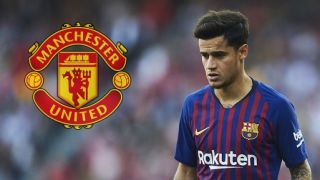 Here we go again. Return of the Phillipe Coutinho rumours.

We said it to you before the January transfer window and we’ll say it again. This has to be one of the worst transfer stories in recent times.

Reports from Spain suggest that Manchester United are one of four clubs considering a summer move for Coutinho, as reported by Manchester Evening News.

Meanwhile, Juventus and Paris Saint-Germain are said to be monitoring a move for the 26-year-old.

The report also adds that Chelsea will join the race for Coutinho’s signature if they manage to overturn their transfer ban.

Mundo Deportivo in Spain claim Coutinho has already told his closest friends he is prepared to leave Barcelona this summer. That follows up a piece published by the Daily Mail which claims the La Liga champions are set to offer the Brazil international to PSG to help seal a shock return deal for Neymar.

Unless Coutinho was played in a deeper midfield role, which defeats the purpose of signing him in the first place, Ole Gunnar Solskjaer may be able to find a place for Coutinho in his team.

Coutinho may not even be interested in a switch to Old Trafford.