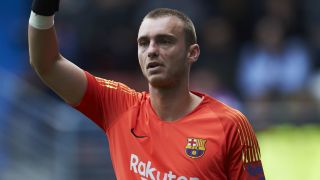 Manchester United have opened talks with Barcelona over goalkeeper Jasper Cillessen, according to reports.

The Reds would prefer it if David de Gea committed his future to the club, but he has yet to agree on terms on a new deal which has dragged on for some time. He can leave on a Bosman next summer unless both parties can find an agreement.

As a result, United are being linked with a number of goalkeepers with the latest being Barcelona back-up keeper Cillessen, who is also being heavily linked with a move to Benfica, as per Marca.

According to Mundo Deportivo (via The Metro) in Spain, the former Ajax goalie is an option and United have opened talks over the possibility of signing him. The report claims the La Liga champions will demand £22m for the 30-year-old.

No matter what way you look at it — this goes for any potential goalkeeper target – no shot-stopper out there will replicate the brilliance of De Gea from previous years.

Ole Gunnar Solskjaer also needs to sort out the defence. That way, we can become less reliant on whoever is between the posts, and become a more efficient unit.