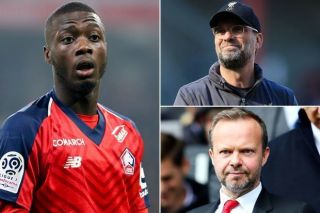 Bayern Munich and Paris Saint-Germain are both said to be keeping tabs on the winger.

Pepe is attracting interest from some of the biggest football clubs in the world this summer – if you believe what is being reported – but he’s become of the most exciting players in French football having joined Lille from Angers in 2017.

NEXT: Man Utd in talks to sign Jasper Cillessen in summer transfer

Last season, the United target provided 23 goals and 12 assists in his 41 appearances across all competitions, which is enough to suggest he’d make a fine addition at Old Trafford.

Castles, who undoubtedly had a closer connection to United when José Mourinho was in charge, says Liverpool have already opened talks with Pepe’s entourage to discuss a transfer to Anfield and Lille are now waiting on a bid for the 23-year-old.

But Castles maintains that United have made direct contact with the French club, with Paris Saint-Germain also ready to pounce if they believe the price is right.

Speaking on The Transfer Window podcast, Castles said, as quoted by the Daily Post: “From what I’ve been told, Liverpool have been in contact with Pepe’s agent to discuss a deal, his interest in coming and what it would cost to come. Lille are aware of this and are waiting for a bid.

“Manchester United have enquired directly to Lille about what the transfer fee would be. PSG also have an interest in Pepe. Lille have been very clear he’s available for sale and the asking price is €80m (£70m). They would love to have a bid come in from Liverpool and United to get an auction going.”