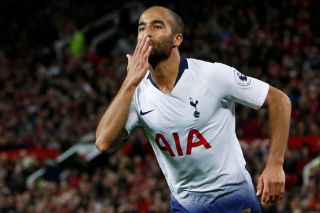 Lucas Moura deserves his spotlight in the lead up to Saturday’s Champions League final. The Brazilian scored a hat-trick for Tottenham Hotspur against Ajax in the semi-finals, which booked their place in the biggest game in football.

In an interview with The Guardian, Moura reveals the reason he didn’t follow through with his transfer to Manchester United, as well as why he fell for Spurs.

“There was a conversation with United but it was for a loan and I didn’t want a loan,” Moura said.

“I thought that if I left PSG, I didn’t want to go back.

“When I came to Tottenham, and I saw the training ground and met the coach, I said that I wanted to come here.”

Moura doesn’t go into detail about how close he came to joining United, but everyone has read the gossip columns that linked the former PSG winger to the Reds.

He has a very good season for Spurs and scored more important goals than the three witnessed in the last round of the Champions League.

NEXT: Inter Milan to launch bid for Man Utd forward next week; Reds demand fee in region of £75m

They will need to be in top form on Saturday night to beat Liverpool in the final, but hopefully, Moura can pop up again with another three goals.

After losing the league to Manchester City and coming so close to ending the 29 (going on 30!) year wait, it would be the perfect slap in the face to see Spurs crowned European champions.

Jurgen Klopp hasn’t the best track record in finals and Moura will be looking to make it even worse.