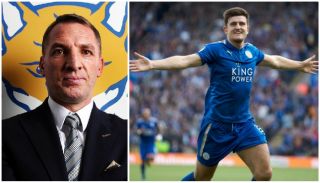 Harry Maguire claims he is happy at Leicester City and wants to resume playing under Brendan Rodgers next season.

The media are picking it up as a transfer setback for Manchester United.

Of course, if it sells papers why not, but Ole Gunnar Solskjaer probably has a list of defenders higher on his wishlist than the England international.

The club has also been linked with a move for Napoli defender Kalidou Koulibaly, with the Irish Mirror claiming Solskjaer has made him United’s No.1 transfer target this summer.

“He’s definitely got his own aspects in the game, and I’m sure he will improve us. After a good pre-season, I’m sure he’s the man that can help us break into those European spaces.”

Maguire certainly seems happy at Leicester but would his head turned if United came knocking on the door as they did a year ago, as reported by The Guardian.

It was clear back then that United needed to sign a centre-back and it’s even more clear now.

José Mourinho raised the issue with Ed Woodward, who then failed to deliver a defensive signing as requested, so United went into the season ultimately unprepared.

The Portuguese coach only lasted half the season before being replaced by Ole Gunnar Solskjaer – initially as a caretaker manager.

United’s defence picked up for a few weeks – like every other area on the pitch – before sinking towards the end of the season when everything the Reds did on the pitch seemed half-arsed.

While I rate Maguire as a decent centre-back, he’s overrated and the prices being touted for his signature are a joke. Forget about him and look to the likes of Toby Alderweireld.