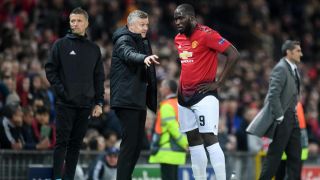 According to The Times, Inter Milan will launch a bid to sign Manchester United striker Romelu Lukaku once they have announced next week that Antonio Conte is to become their manager.

Lukaku didn’t have the happiest of seasons in his second year at Old Trafford and the change in managers saw the Belgian striker drop below Marcus Rashford in the pecking order.

There is no doubting that Lukaku is a goalscorer but United need a strike of higher quality. He’s not an elite striker by any stretch of the imagination, even if his goalscoring stats read well for a 26-year-old, and Ole Gunnar Solskjaer knows there are better finishers out there.

Marcus Rashford has not yet reached the point that he can be relied upon as United’s main goalscorer. The England international doesn’t look like he’s near becoming a 20+ goal per season striker which should be the goal return of Manchester United’s main frontman.

The Times make it clear that United will not stand in Lukaku’s way if they received a bid in the region of £75m that they paid Everton to sign him two years ago.

Moreover, the Toffees will earn a £5m windfall if United sell Lukaku.

When he first arrived at Old Trafford and couldn’t stop scoring from the start, I didn’t imagine his time at the club being so short-lived.

Yet I have no problem with United selling Lukaku.