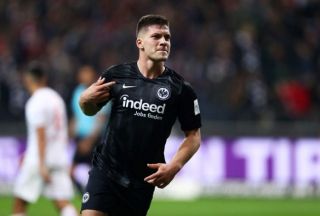 Just when it looked like Eintracht Frankfurt striker Luka Jovic was headed to Real Madrid, the Serbia international dropped a massive hint that he would prefer a move to the Premier League this summer.

Jovic told Die Welt, cited by the Mirror: “In terms of the physique, the Bundesliga is very demanding, but after the game against Chelsea or Inter Milan, I personally had the feeling that I could feel even better [playing] in the Premier League or Serie A.”

This should come as an invitation to English clubs, with the striker likely to be part of a transfer before the new season begins.

Ole Gunnar Solskjaer is said to be keen to build his squad around young hungry players. And with Romelu Lukaku strongly linked with a move away from Old Trafford, as per The Sun, it makes perfect sense to evaluate Jovic’s situation.

However, Marca claim Jovic could cost as much as €70m this summer. That’s a big difference from the estimation given via Transfermarkt, suggesting the striker is worth €55m instead.

According to WhoScored, he scored 17 goals in the league this season and another 10 in the Europa League. That stunning record in Europe without question earns him the goal-machine label.

The Serbian forward carries the ball a lot better than Lukaku but shares the same eye for goal as the former Everton frontman. He’s an intelligent attacker who runs how and when to make runs in behind the defence and could also provide a genuine counter-attacking threat, which I feel would complement Solskjaer’s style.

Jovic arriving would also put some pressure on Marcus Rashford. Perhaps the kick up the arse he needs?