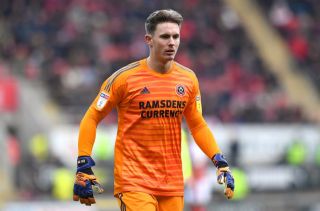 Sheffield United have received encouragement over a deal to sign Manchester United goalkeeper Dean Henderson on loan, according to reports.

The Sheffield Star claims negotiations ‘are edging towards a positive conclusion’ which could do the shot-stopper the world of good, earning valuable Premier League experience which could work in his favour when the time comes for United to replace David de Gea.

NEXT: Man Utd to match City in £105m race for Portuguese wonderkid

The report states that there is still some work to be done before a loan deal can be announced, but there’s hope it can be put to bed prior to European under-21 Championships.

It is also thought that United had no intention whatsoever to let Henderson leave on a permanent basis, but after being part of their promotion to the Premier League this season, the goalie made it clear he wanted to head back to Bramall Lane.

We look forward to keeping a close eye on Henderson next season, so long as he does end up at Sheffield United again.

Returning to Old Trafford would be pointless right now with De Gea and Sergio Romero both ahead of him in the pecking order.