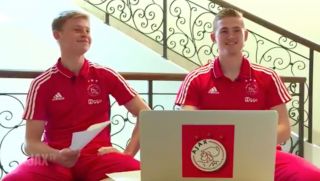 Manchester United are still being heavily linked with a move for Ajax captain Matthijs de Ligt.

The 19-year-old has emerged as the hottest property in world football this summer after an incredible season which saw Ajax reach the Champions League semi-finals.

Although, this morning we are looking at a throwback from 2018 on Ajax’s official TV channel showing De Ligt asked by teammate Frenkie de Jong (now a Barcelona player) about his most difficult opponent.

“That has to be Rashford, from Manchester United. Great player, quick technical skills,” De Ligt said, as quoted by The Mirror.

Now fans will be hopeful Rashford’s done his bit to convince De Ligt that United is the right club for a young player his age.

Frenkie De Jong: “Who’s the most difficult player you’ve come up against?”

De Ligt: “That has to be Marcus Rashford from Manchester United,”

Barcelona appeared to be in pole position to secure his signature this summer but they are refusing to meet demands forced by the player’s agent Mino Raiola.

Raiola already has a patchy relationship with certain clubs and Barcelona will recall some of their dealings with him from the time Zlatan Ibrahimovic was at the club and forced out by Pep Guardiola (Goal has documented part of the feud with Guardiola).

However, it is interesting that United remain in the race to sign De Ligt despite failing to qualify for the Champions League. Surely they would have ruled out a move by now if he was totally against the idea of coming to Old Trafford?

But United has a rich history – just like his beloved club Ajax.

Meanwhile, The Express has ran quotes from transfer expert Ian McGarry who claims that Woodward turned down a demand from Raiola after he requested a huge commission for any potential deal, similarly to how he struck the Paul Pogba deal in 2016.

“Regarding the United negotiations with Raiola, he was looking to do the same sort of commission deal he got for Pogba, which was 24m euros,” he told the Transfer Window Podcast.

“Now that was paid up front, very very unusual in football that an agent gets the entire commission up front.

“Normally, it’s paid over the course of the player’s contract in equal instalments.

“The same for De Ligt. He wanted the money paid up front.

“And United said no. ‘We’re not going to do business any more that way. We need to have something in hand that we know we can try and rein you in with.’

We still think it’s too early to be getting excited about signing De Ligt and many are forgetting there are other clubs interested too, not just Barcelona and United.