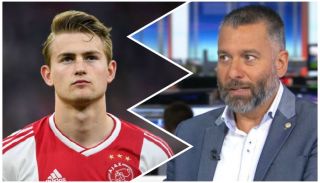 Barcelona were expected all along to secure the signature of the brightest prospect coming out of the Netherlands right now, swiping interest from clubs like Manchester United out of the way.

Now we must wait for De Ligt to make his own decision – but that won’t happen until the Netherlands are finished with the Nations League.

“I think De Ligt is right in just being calm about the situation,” Balague said on his YouTube channel (as quoted by The Express).

There is enough to suggest from these quotes that something over the past month changed.

It’s anyone’s guess but while I think De Ligt will end up at Barcelona, the saga is by no means finished yet and United would be foolish to give up on the Dutchman.

A very underwhelming end to the transfer saga should it happen… pic.twitter.com/eLnoT54dfm

United are crying out for a player like De Ligt and the club should do all it can to bring him to Old Trafford this summer.

He is exactly what Ole Gunnar Solskjaer needs ahead of next season!