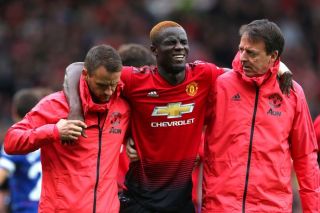 It sounds like Eric Bailly will be given another chance to prove his worth at Manchester United, with the club reportedly hopeful he will be fit to fly out to Australia for the first leg of their pre-season tour, as reported by ESPN’s Rob Dawson.

Bailly, 25, suffered a knee ligament injury during the 1-1 draw against Chelsea towards the end of the season and there was already speculation at the time about his days at Old Trafford being numbered.

The Daily Mail were among those writing gossip columns on the Ivorian centre-back – suggesting Arsenal are interested in securing his signature this summer.

Bailly will miss Ivory Coast’s African Cup of Nations campaign, but the club expects him to be recovered in time to travel Perth on July 7.

The Reds take on Perth Glory and Leeds in Australia before playing Inter Milan in Singapore, Tottenham in Shanghai, Kristiansund in Oslo and AC Milan in Cardiff.

ESPN add that Solskjaer has added Harry Maguire and Kalidou Koulibaly to his transfer shortlist for the summer, but the manager is prioritising a right-back addition to replace Antonio Valencia and Ashley Young, while competing with Portuguese youngster Diogo Dalot.