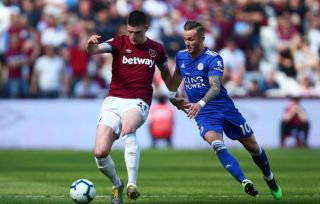 West Ham midfielder Declan Rice has rubbished any talk of a transfer following recent speculation hinting that he was a target for Manchester United this summer.

The England international was excellent last season when he became one of the Hammers’ most important players, as well as earning his first cap for his country.

NEXT: Man Utd fans will love what transfer target Matthjis de Ligt said about his toughest ever opponent

The Mirror linked Rice with a potential £50m transfer to United, where he’d offer an improvement on both Nemanja Matic and Fred, but the youngster seems happy to remain where he is right now after putting pen to paper and recently signing a new deal with West Ham.

“I know there is speculation,” Rice is quoted by ESPN.

“During the season last year I signed a five-year contract with West Ham. My focus is fully on playing for West Ham. I’ve got a great connection with the fans – I love them, they love me.

“That’s the way it is at the moment. I’m not thinking about anything else.”

This means United may have to consider alternatives to bolster their midfield, with the Reds also linked with Lyon star Tanguy Ndombele, as per L’Equipe.

Rice played primarily as a midfielder last season but he played as a centre-back in his earlier years.

Of course, it’s early days for Rice after just breakthrough. He has plenty of time to make the move and United will keep calling as long as he develops.