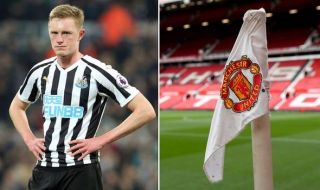 Manchester United have been linked with making a move for Newcastle midfielder Sean Longstaff.

Ex-pros have spoken about the potential deal, with Kevin Kilbane urging the 21-year-old not to make the big move just yet, as per Manchester Evening News.

The 21-year-old is seemingly gathering interest following his performances in the middle of the park for Newcastle last season, but you shouldn’t believe everything you read.

NEXT: Man Utd fans will love what transfer target Matthjis de Ligt said about his toughest ever opponent

Longstaff is one of the many lesser-known footballers United have been reportedly interested in this summer, though a tweet from Daily Mail journalist Craig Hope reveals that Newcastle have not even received an enquiry from the Old Trafford club, along with no reason to believe there will be a bid anytime soon.

A small NUFC line away from ‘takeover’… I’m told there has not even been an enquiry from Man Utd for Sean Longstaff & certainly no bids. NUFC have no reason to believe one is due either.

This is what you get during the silly season, so it’s important to filter your social media feeds and only follow those you deem reliable.

Otherwise, it’s going to be a long summer for everyone involved.