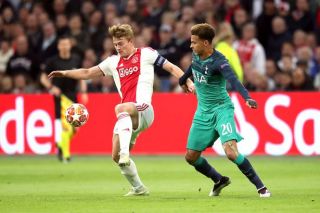 Some of these updates are responsible for dragging Manchester United into the transfer saga, but we won’t complain about that if De Ligt ends up at Old Trafford this summer.

The latest from Spanish media comes from Mundo Deportivo, with the newspaper suggesting that Barcelona do not want to enter a bidding war for the Netherlands defender.

Reports add that United are now leading the race due to the amount of money the club is willing to offer for De Ligt’s signature.

NEXT: Daily Mail reporter knocks down claims Man Utd have made enquiry for Newcastle ace

Barça appeared to be the most likely destination for the 19-year-old and he would then link-up with Ajax teammate Frenkie de Jong, who will join Barcelona this summer after completing his £65m transfer to Camp Nou midway through the season, as per The Independent.

According to Manchester Evening News, Old Trafford chiefs do not expect De Ligt to sign for United. The Manchester based outlet has reason to believe that the player’s agent, Mino Raiola, is using interest from elsewhere to get a better deal out of the La Liga champions.

But what does it mean if Barça genuinely drop out of the race to sign De Ligt because the price becomes too steep? Raiola can’t retract then.

It could also come back to bite Barça in the arse as De Ligt is easily one of the best young defenders in the world right now.

Let’s see what happens… but this saga is likely to drag on.