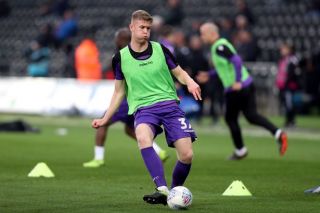 Stoke City defender Nathan Collins has been linked with a move to Manchester United, as per the Daily Mail, but he has been encouraged to snub any interest from the Premier League giants.

It’s a pretty big ask for a 18-year-old to turn down one of the world’s biggest clubs but we should also ask how genuine United’s interest is?

While I know nothing about Collins or how good he is, the Mail’s report above claims that he was recommended by former United midfielder Darren Fletcher, which is interesting because the Telegraph previously ran an exclusive that he was being considered for the technical director role at the club.

Maybe Fletch reckons he has found a fem for United, but another former Stoke player believes he should snub any interest.

Speaking to Radio Stoke, Denis Smith said (as quoted by Manchester Evening News): “If he goes to Manchester United, even though he looks very good, I doubt he’ll be starting too many Premier League games. He’d be better playing the games at Stoke and taking them up to the Premier League.

“Then if he goes to a team in the Champions League that’s the way of the world.”

I understand people trying to make players think twice before making a big move too soon, but how can you not encourage a young lad to go on and do the best he can?

Collins may not be good enough for United, but if the scouts reckon he’s worth a punt it seems harsh of Smith to downplay the Stoke defender like that.

Watch his debut for Stoke City from earlier this year below.