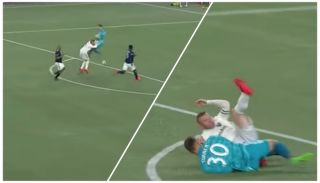 DC United managed to take a point from their recent outing against New England Revolution thanks to a last minute Wayne Rooney penalty.

The former Manchester United striker got his name on the scoresheet, but it wasn’t the greatest of evenings for our all-time record goalscorer.

After half time, Rooney found himself clear in on goal against New England goalkeeper Matt Turner.

Turner came out of his box and rammed into Rooney (start video below at 5.10).

Thankfully, Wazza was not seriously injured and continued to play the match, but he did look a bit shook after the collision.

Rooney has 8 goals and 3 assists to his name for DC United this season.