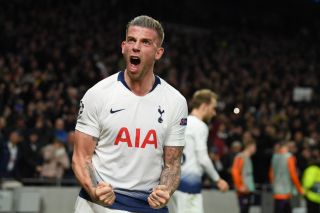 Manchester United need to sign a top class defender this season to lead from the heart of defence.

The Reds continue to be linked with Tottenham defender Toby Alderweireld and he’s been asked again about his future in an interview with Sport360.

“I’m going to say the same thing that I’ve been saying the past couple of years,” said Alderweireld. “The only focus is Spurs, because of this focus I think I had a good season as well. I have one year left on my contract, so in my head, I will play for Spurs next season.”

While it sounds like Alderweireld is ruling out a summer move, what else could he possibly say?

It could be a matter of not wanting to disrespect his current club – the opposite to what Paul Pogba did by admitting it would be a ‘dream’ to play for Real Madrid – and it remains to be seen whether United will go back in for the Belgium international.

🗣 In amongst all the De Ligt talk, I still think #mufc should go out and sign Toby Alderweireld. Experienced, an on-field leader and excellent with the ball at his feet 💪 pic.twitter.com/LcoJOQocqK

With his contract running down, Alderweireld could be a cheaper option than some of United’s other transfer targets. The only issue is he’s kicking on and Ole Gunnar Solskjaer is looking to build his team around young players, though he would be silly not to throw a bit of experience into the mix.

Alderweireld was brilliant for Spurs last season and would make a vast improvement on what United currently have in defence. I’ll give up hope if we start the season playing Phil Jones or Chris Smalling at centre-back.