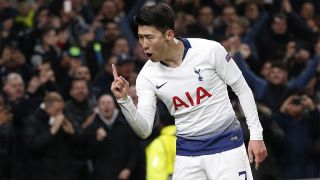 Son Heung-min Son will be looking to lead Tottenham Hotspur to Champions League glory this weekend when the London outfit take on Liverpool in the final.

Liverpool winning the European Cup for a sixth time is a horrible thought, so hopefully Son and his teammates can get under Jurgen Klopp side’s skin and make the German coach suffer another defeat in a final.

Klopp has yet to win a piece of silverware at Liverpool, yet he continues to be lauded as the Messiah.

But Son is looking to emulate former Manchester United midfielder Park Ji-Sung on Saturday night by flying the flag for South Korea in the Champions League final.

“He was unbelievable,” Son is quoted as saying via Manchester Evening News. “I respect him. I respect the players who started playing in Europe because they opened the door and gave us the opportunity to play in Europe. This was what I wanted to do – to play in Europe.

“And now I want to give a good image of South Korean players and open the door even wider than it was a few years ago.

“This is my target. This is what I’m aiming for. Of course it’s not that easy. I try to be like him [Park] because he did an unbelievable job for us and for our country and that’s why I respect him so much.”

It would be great if Son and co could spoil Liverpool’s party on Saturday, like Real Madrid did in Kiev last year.

Liverpool also lost out on the Premier League title this season, so the extra blow would be a delight to witness.

Ignore shouts that everyone wants to see a club like Liverpool back winning the biggest prizes because that couldn’t be further from the truth.

I don’t like seeing them win a match, never mind anything else!