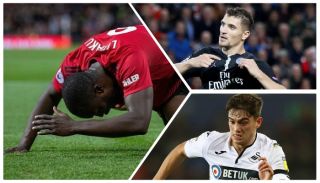 Welcome to the latest football transfer gossip column from Stretty News, featuring all of the latest Manchester United transfer news and rumours.

Here, we take a look at some of the top MUFC transfer stories, published every day throughout the 2019 summer transfer windows.

NEXT: Sergio Ramos to Man Utd odds: Reds behind Chinese and Italian suitors in race to sign Spain captain

We still seem to be caught in the Matthjis de Ligt crossroads with Barcelona dancing around the prospect of signing the super talented Ajax centre-back. The latest from Spanish radio station RAC1 claims Barcelona have already started considering alternative options to the Netherlands international.

Below are the top stories worth keeping note of on Monday, May 27.

More on the Lukaku front: Calciomercato continue to link the Belgium international with a summer move to Inter Milan, as long as Antonio Conte takes the job as manager. The report suggests that Rom is willing to take a pay cut to join the Serie A giants.

Ole Gunnar Solskjaer has set the club a deadline of next year to sell unwanted players, as reported by the Manchester Evening News.

France Football (cited by The Metro) have a story on Unai Emery wanting to hijack United’s move for Thomas Meunier after being impressed by the full-back during his spell as manager of Paris Saint-Germain.

MEN understands that United will sign Swansea City winger Daniel James for a fee of around £15m, potentially mounting to £20m with add-ons.

And finally, Tuttomercatoweb suggest that United view Gianluigi Donnarumma as an ideal candidate to replace David de Gea should the Spaniard decide to call time on his time at Old Trafford.