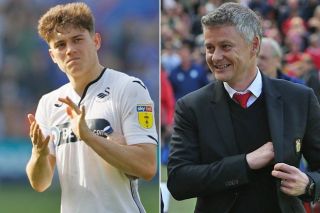 It sounds like Manchester United are finally closing in on their first transfer of the summer.

According to the Manchester Evening News, Swansea City winger Daniel James looks set to join the club for a fee of around £15m, with add-ons potentially mounting the fee to £20m.

The report adds that personal terms were agreed on with the Welshman before his father died last week. As a result, James was given time and space to grieve.

That’s a lot cheaper than most of the deals United do nowadays and it suggests a change of times for the club, and it’s not necessarily a bad thing.

United need to find a way to identify talent and find a way to develop world-class players again, but who knows how good Dan James will be?

He was named in Ryan Giggs’ preliminary Wales squad for upcoming Euro 2020 qualifies against Croatia and Hungary, so you’d imagine Ole Gunnar Solskjaer has been on the phone to his ex-teammate and asking about the 21-year-old winger.

MEN state that the deal to United could be done before those qualifiers – with the first game on June 8 – so there’s a good chance we’re talking about our first summer signing.

Swansea chairman Trevor Birch dropped a hint that James’ departure was imminent over the week, in an interview with WalesOnline. He was asked how many players they would sell this summer.

Birch said: “I can’t see there being many. If the Dan James thing happens then there might be possibly one or two, I don’t know. But I can’t see a fire sale of players.

“If someone comes in with an offer that is sensible and proper player trading then you have to think about that.

“But you can’t give players away. You’ve got to get the right value for them. We aren’t in a position, and I am pretty well versed in financial positions and football clubs, where we have to sell a player or is it ‘Good Night Vienna’. We can hold out for the right prices.”

If Solskjaer is looking to add young homegrown talent to his team for next season, Dan James may not be a bad idea.

And we definitely need pace on the right from a specialist winger.