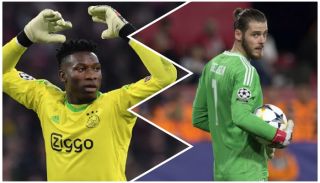 Journalist Duncan Castles claims the Reds have even had a bid rejected by the Eredivisie club for the shot-stopper, who they are believed to have put a €40m price tag on, as cited by the Manchester Evening News.

Listen to Castles on The Transfer Window podcast here.

Onana showed the world his ability during this season’s Champions League, which saw Ajax reach the semi-finals of Europe’s biggest tournament, only to be knocked out by finalists Tottenham.

Castles also claims Ajax have began looking for a replacement should Onana leave. They’re apparently watching Lille keeper Mike Maignan, as reported by Caught Offside, so they must feel a transfer is on the cards at some point.

‘Manchester United have made an offer to Ajax for their goalkeeper Andre Onana as a potential replacement for David de Gea,’ Castles said on The Transfer Window podcast.

‘I can tell you now that Ajax have enquired about the price that would be required to buy a replacement for Andre Onana.

‘The player in question is Mike Maignan, the goalkeeper at Lille, who’s just been voted the best goalkeeper in Ligue 1 for his performances in their campaign where they finished second.

‘Twenty-three-year-old, about to be called up to the French national team for the first time.

‘Ajax obviously see him as a successor to Onana should Manchester United meet their asking price of £40m for their goalkeeper and have started work on trying to secure him.

‘He will be expensive and he may not be attainable for Ajax because I’m told there’s interest in him from other clubs, one of them being Paris Saint-Germain.

‘Potentially, we could actually see Maignan, with the quality of his play, as a potential replacement for Manchester United, who have scouted him a lot.

‘Not necessarily focusing on Mike but looking at players like Nicolas Pepe, who they’ve also enquired about at Lille recently.’

The Cameroon goalkeeper would be replacing one of the best in his position if he was to join United, but it’s worth stating that United’s defence is in dire need of improvements.

As it stands at right-back, United have Ashley Young or Diogo Dalot to select from next season. Chris Smalling and Phil Jones recently signed new deals while only Victor Lindelof looks good enough at the heart of defence.

So, for any potential keeper signing, we should try sure up the defence to avoid being as reliant on the man between the sticks.

The last few years have been bad but it’s difficult to imagine how bad they would have been without De Gea in the team.