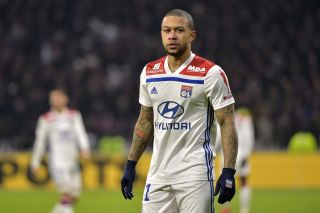 According to Sky Sports, Liverpool have no interest in signing ex-Manchester United winger Memphis Depay this summer.

Tons of speculation did the rounds this past week in relation to Jurgen Klopp’s side wanting to make Memphis one of their summer transfers, as per talkSPORT, but the latest from Sky Sports states that the Champions League finalists are not going to move for the Lyon attacker.

NEXT: Lukaku has already agreed terms with Serie A giants; Man Utd turn down swap deal including €30m rated winger

Memphis should take some responsibility for the transfer merry-go-round that follows his name everywhere. His social media is a paradise for clickbait merchants and just this week the 25-year-old uploaded a video to Instagram where he was filmed boarding a red private jet wearing a red suit.

That spin out a few Liverpool headlines!

If Memphis did join Liverpool this summer, he would be doing so as a former United player. One who struggled to find form and eventually left Old Trafford a year-and-a-half after his arrival.

His form has certainly picked up since joining Lyon which makes you think the pressure of playing for the mighty Reds may have got to Memphis.

Memphis may act overly confident on social media, but the Netherlands looked lost at United.

We knew Memphis had some level of intelligence.