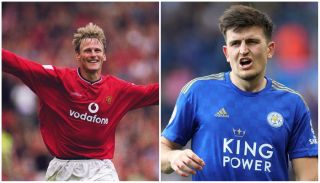 Teddy Sheringham thinks Manchester United need to prioritise a centre-back signing this summer, and he believes Leicester City’s Harry Maguire is the right man for the Reds.

The England international was strongly linked with a move to Old Trafford a year ago, with José Mourinho at the helm, but the former United striker thinks United should reignite their interest in the player.

“Well, I think Real Madrid are going to be in the same boat as Manchester United this summer, so you’ve got to beat them to sign the top players that are out there,” Sheringham told the Mirror.

“Central defence is a big area where they ned to find a Vincent Kompany or Tony Adams-type player.

“I really believe they should go back to the British mentality. The core of any good, British team, comes from British players, as I see it. Over the last 20 or 30 years, if a British team does well in the league or in Europe, there’s always a core of British players involved.

“OK, Manchester City do go away from that trend, but in general they are players with a British mentality who understand what it is to win. You only have to look at the past success of Manchester United, Arsenal and Chelsea, to see that core of British players.

“I think Harry Maguire is the one for me. He’s got great leadership qualities, and has a real calming influence. He’s very similar to Rio Ferdinand, in that he’s cool on the ball and defends very well. That would be a fine start from my point of view.

“Top players like Harry are going to have the choice of some big, big clubs around Europe this summer.”

Rivals Manchester City are yet to show any interest in signing the 26-year-old, but they are favourites with Sky Bet to land the defender this summer, ahead of United.

Full list of odds below – for Maguire’s next club:

Leicester City are probably anticipating  a busy summer with lots of interest surrounding Maguire, but after a decent World Cup last year they still managed to keep their most prized asset. They will be hoping to do the same a year on, with Brendan Rodgers now in charge.

I think there are better options out there — some that would be available for cheaper than what Leicester will demand for Maguire’s signature — but it all comes down to what Ole Gunnar Solskjaer feels.

Just consider ourselves doomed if United start next season with either Phil Jones or Chris Smalling at the back.