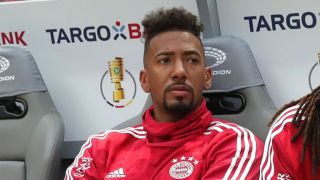 The Manchester Evening News claims Manchester United have been put ‘on alert’ over the potential availability of long-term target Jerome Boateng.

Bayern Munich president Uli Hoeneess recently told the German centre-back to consider his options once the transfer window opens, so time will tell if he took the hint and asked his agent to find him a new club.

NEXT: Lukaku has already agreed terms with Serie A giants; Man Utd turn down swap deal including €30m rated winger

Hoeness revealed his recommendation to Boateng, as per Sky Sports: “I would recommend him as a friend to leave the club. He needs a new challenge, recently he has seemed out of place.”

Out of place or finished at the top level? The last time United did business with Bayern it meant Bastian Schweinsteiger would end up at Old Trafford, and he was definitely finished at that stage.

Boateng has plenty of experience being a World Cup winner, but his time in the Premier League with Manchester City didn’t go to plan. He rediscovered his form after signing for Bayern a year later, in 2011 and has been at the German club ever since.

While United have their problems at the back and everyone seems desperate for the club to sign defenders, Boateng at 30 is not the answer, and his form has been dwindling for some time.

With Bayern publicly stating that Boateng is for sale, he should be available on a cut-price deal, and Transfermarkt claims he is currently valued at €30m.

Arsenal, Paris Saint-Germain and Inter Milan are all said to be keeping tabs on Boateng, as reported by The Metro.