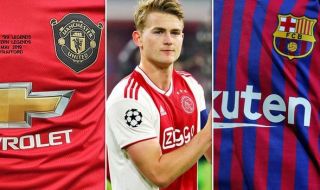 The 19-year-old is hot property this summer and Manchester United are one of the clubs said to be trying to sign him, with The Express reporting on Mino Raiola’s involvement.

Raiola, De Ligt’s trusted agent, is renowned for getting his clients the best possible deals and he will be treating this one no different.

NEXT: Transfer headache for Man Utd as Toby Alderweireld speaks out about future expectations

De Ligt has already been asked repeatedly about his plans for the future, but the Netherlands international has been wise enough not to rule anything out.

And while it looked certain that his next destination would be Barcelona, reports in Spain claim United are front runners for De Ligt’s signature.

Spanish radio station RAC1 claim Barça are working on alternative plans as a transfer insurance policy, so they won’t end up with egg on their faces if De Ligt ends up elsewhere. They put this decision down to high economic demands and other teams trying to create a bidding war.

Manchester Evening News add that United don’t expect to sign De Ligt this summer, so where is the Ajax captain headed?

There are also rumours at Camp Nou that Ernesto Valverde’s job is under review, with The Guardian reporting on interest from Barcelona’s part in former Wigan Athletic and Everton manager Roberto Martinez, who is currently in charge of the Belgium national side.