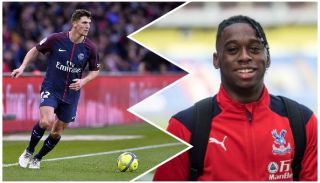 Manchester United have been linked with PSG full-back Thomas Meuiner as an alternative to Crystal Palace’s Aaron Wan-Bissaka.

It is thought that Meuiner would be easier to snap up and cheaper, with Manchester Evening News claiming that the French club have a history of linking players who they want to get rid of with moves to United.:

That way the said player should garner interest from other clubs and now Meuiner is being linked with another Premier League side.

According to France Football, cited by The Metro, Unai Emery was impressed with Meuiner during his time as PSG boss and has added the Belgium defender to Arsenal’s transfer shortlist.

The report also claims that PSG have slapped a €30m (£26.5m) transfer fee on the defender.

United need a right-back this summer with Antonio Valencia’s contract set to expire. The veteran didn’t feature much last season and it’s definitely time to move him on.

Moreover, Ashley Young is far from ideal, as he’s no longer the player he was and is regularly positioned on the opposite flank he prefers. Diogo Dalot looks promising but I haven’t seen enough to believe he’s ready to be our prime option at right-back.

If it comes down to it, Wan-Bissaka would be my pick of the two. Ole Gunnar Solskjaer is said to be targeting young homegrown players in the transfer window, and at 27 Meunier doesn’t fit that profile.