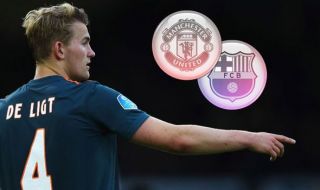 The Manchester Evening News did their digging and got word from Manchester United on transfer target Matthijs de Ligt.

Reports from Spain this past week suggested United had become frontrunners to sign the 19-year-old Ajax captain, but that has since been dismissed by the Old Trafford club.

As reported by the MEN, the 20-times champions of England still expect De Ligt to join Barcelona this summer despite constant speculation suggesting he was headed to United.

De Ligt would be a tailor made signing for United; he’s got everything you want in a young centre-back, and he plays like a footballer well beyond his years. The Reds are also crying out for a leader and from what I’ve seen this season of Ajax in the Champions League, he looks exactly that – at the highest level.

Even if he does sign for United, which remains unlikely, his agent Mino Raiola will have a plan to move him on in 3-5 years. Stretty News has learned that Paul Pogba returned to Old Trafford in 2016 after receiving a familiar promise.

De Ligt is on international duty with the Netherlands ahead of their Nations League semi-final with England on June 6 but has spoken about his future at the Dutch camp.

“Where do I see myself? Well, obviously, the Premier League is a big competition, Spain also,” De Ligt told ESPN. “But you have other competitions, it’s not just about those two.

“I still don’t know anything about where my future is, so I see how it goes. First we have to play two games and then after that I will see what happens next.”

Matthijs de Ligt claims he has not made a decision. pic.twitter.com/i8Oa6M0deB

United sources have told the MEN the suspicion among the United hierarchy is the story is being framed so Barcelona can eventually claim they beat United to De Ligt’s signature.