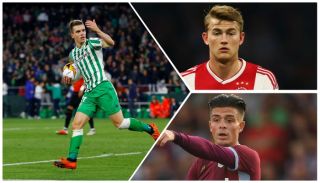 Welcome to the latest football transfer gossip column from Stretty News, featuring all of the latest Manchester United transfer news and rumours.

Here, we look at some of the top MUFC transfer stories, published every day throughout the 2019 summer transfer window.

It should be a busy transfer window for the Reds, but this piece by Andy Mitten for ESPN is certainly worth a read. It mentions how United are working towards signing Swansea City winger Daniel James.

Below are the top stories worth keeping note of on Monday, May 27.

Marcos Rojo has said that he has been reassured he has a future at Old Trafford, as per the Daily Express.

Ajax captain Matthijs de Ligt is asked about his next destination in an interview with NOS.

“He’s a great player and only a youngster but he plays like an adult. He’s got composure, he’s aggressive and tactically he reads the game well. I think he would fit in here (at Manchester United) pic.twitter.com/cn5ZYojTnf

Real Madrid have made a £79m bid for Manchester United target and Napoli defender Kalidou Koulibaly, as reported by The Sun.

The Metro claims Manchester United have made a move for Real Betis playmaker Giovani Lo Celso, 23, and will have to beat Tottenham Hotspur to his signature.