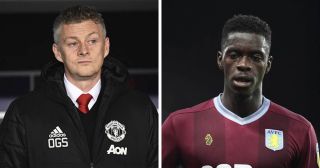 Manchester United loanee Axel Tuanzebe’s Aston Villa side have been promoted to the Premier League, after beating Derby 2-1 in the play-off final at Wembley.

Tuanzebe, 21, started the huge Championship clash and proved a key figure in the Midland club’s success.

The centre-back has been a mainstay in Dean Smith’s side all season in his loan spell, earning high praise for excellent performances in defence. He has made 30 appearances this season (whoscored), gaining valuable first-team experience in a notoriously tough division.

Ole Gunnar Solskjaer now has a decision to make on whether to keep the young defender at Old Trafford, or whether to loan him out again to Aston Villa, where he can play regular Premier League football.

With the Reds’ clear defensive frailties, you would think that there is no reason Tuanzebe can’t push for a place in United’s squad next season, if he is given the chance to impress in pre-season.

United have been linked with Ajax captain Matthjis De Ligt and Napoli’s Kalidou Koulibaly this summer, though it still looks unlikely either of these deals will be pulled off.

Many Reds on twitter have called for Tuanzebe to be promoted to United’s first team next season, but there is a recognition that another season out on loan could also continue the youngster’s development.

It’s time for Axel Tuanzebe to step up to first team football with Manchester United. Would prefer to see him develop than watching Jones and Smalling take a step backwards every season. #mufc

Time for Axel Tuanzebe to come back to #MUFC. Surely deserves game time ahead of the players we've been subjected to, who for almost a decade, more often than not, have let us down. #AstonVilla #MUFC_FAMILY

Slots back in @ManUtd… 👀 pic.twitter.com/6TDK5yuLDC

I would give Axel Tuanzebe a chance in pre season, but unless he is going to be undisputed first choice next year, surely it’s in our best interests to loan him back to Villa?

Better for his development to be playing PL football every week instead of sitting on the bench.

We all like Axel Tuanzebe at #MUFC and want to see him improve. However, it might he smart to loan him back to Aston Villa for 12 months now they are in the Prem. He needs to keep playing and developing, not sat on our bench. Axel could become a genuine star.

Another tremendous performance from Axel Tuanzebe, can’t explain how much I want this lad to succeed. Ole’s a big fan, already said he can’t wait for Axel to join up with the squad before we head out on tour. Can only hope he performs to the same level he has done with Villa.

Here's hoping Axel Tuanzebe gets his chance to prove himself at United next season ahead of Smalling and Jones. No excuses not to. #MUFC

@ManUtd , surely Axel Tuanzebe would be a better option than Smalling or Jones!