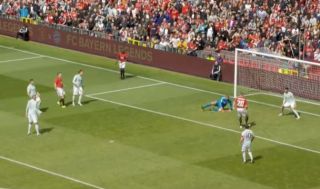 Not quite “AND SOLSKJAER HAS WON IT” but amazing nonetheless.

Ole Gunnar Solskjaer has put Manchester United legends ahead against Bayern Munich in a friendly match 20-years on from the night he scored the iconic winner to win the Champions League against the German giants.

Solskjaer was only on the pitch a few minutes before he got his name on the scoresheet.

NEXT: (Video) Behind-the-scenes look at Man Utd dressing room as Sir Alex Ferguson chats with the Treble winning side 20-years on

The current manager of United, today managed by Sir Alex Ferguson, slotted home comfortably after replacing Andy Cole from the bench just minutes into the match.

Cole, who has had well-documented health issues in recent years, received a standing ovation as he left the pitch.