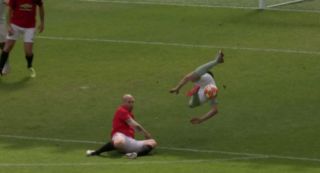 Jaap Stam was a solid, no nonsense centre-back. The sort of defender we’re crying out for now at Manchester United.

He has been in fine form this evening at Old Trafford as the Manchester United legends take on Bayern Munich in a charity match, 20-years on from the night the Reds came from behind to beat the German giants at the very end, thanks to a stoppage time Ole Gunnar Solskjaer winner.

NEXT: The probable reason why Roy Keane is not part of Man Utd legends team for throwback clash against Bayern Munich

Stam was one of the players involved during that memorable night at Camp Nou.

And thus far in today’s game he has made sure to involve himself in a tackle or two.

Typical of the man really, taking his man for a shortcut! See the video below.

Jaap Stam taking no prisoners in a charity match 😂😂😂 pic.twitter.com/sAY1nIahos

Yip Jaap Stam is a big Dutchman,
Get past him if you f*cking can,
Try a little trick and he’ll make you look a d*ck,
Yip Yap Jaap Stam…