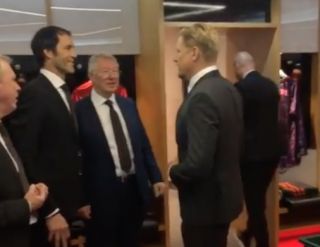 The match is played 20-years on from that memorable night in Barcelona, when Ole Gunnar Solskjaer won it in the dying minutes to complete a historic treble for the Reds — never to be achieved again by an English club.

So, with the boys back in town Mikael Silvestre, who signed after United won the treble, caught some footage of everyone chatting in the Old Trafford dressing rooms.

Ferguson is amongst them and he looks great!

The Scott is expected to announce his starting line-up pretty soon and we’ll have all the updates as per usual.