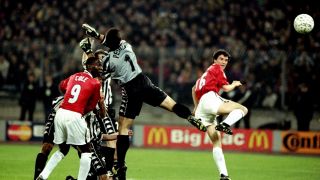 You probably noticed that Roy Keane is not part of the Manchester United legends squad for today’s clash against Bayern Munich at Old Trafford.

The match celebrates United’s iconic Champions League triumph at the expense of the German giants, a game that Keane missed out on due to suspension.

But so did Paul Scholes, who starts alongside Nicky Butt in midfield.

NEXT: Barcelona ace urged to stay rather than join Man Utd by former legend

Karel Poborsky and Louis Saha are in the squad but joined the club after the Treble winning season.

Well, Keane and Sir Alex Ferguson have not made peace and both would maybe not rather share the same room for more than 5 minutes, and that seems like the only logical explanation for his absence.

It’s a shame because we’re talking about one of the club’s greatest captains — and without him, I don’t think we’re beating Juventus in the semi-finals.

Maybe one day they the legendary duo can put their differences aside.

Phil Neville and Ryan Giggs are not involved because both managers are busy on international duty.