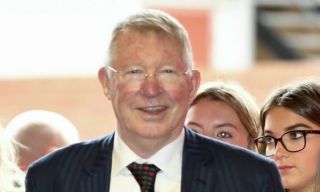 Sir Alex Ferguson is back in the Old Trafford dugout this evening for when Manchester United legends take on Bayern Munich.

To mark the 20th anniversary of United’s iconic Champions League win over the German giants, the two teams meet today with an array of legends taking to the field.

NEXT: (Video) Behind-the-scenes look at Man Utd dressing room as Sir Alex Ferguson chats with the Treble winning side 20-years on

United have a few players on the bench who joined the club after the treble season, but they’re all considered legends their own ways.

Current manager Ole Gunnar Solskjaer takes to the bench like he did on that incredible night in Barcelona.

Hopefully today’s game contains half the drama it did 20-years ago, with Solskjaer scoring in the dying moments to win it for the pride of all Europe.