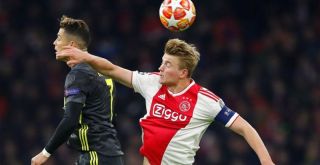 Last night it was reported that Manchester United were on the verge of pipping Barcelona to the signing of Ajax captain Matthijs de Ligt.

This meant that the Netherlands centre-back, 19, has the pick of two of the biggest clubs in the world, with United and Barcelona both reportedly keen to snap up his signature.

Miguel Delaney has delivered plenty of reports on United lately, with The Independent claiming that communications with Antoine Griezmann’s entourage are back on.

The Independent’s chief football writer jumped to Twitter on Saturday night to give a further update on things United. This time in relation to De Ligt and the news that was coming out of Barcelona.

It gave a clear indication of United’s stance on De Ligt. He would obviously prefer a move to Barça but it’s still possible through talks that we could give an alternative perspective on his next move.

See Delaney’s tweet below about United’s willingness to offer a staggering amount of money to convince the Dutch defender.

United willing to offer “staggering” money to De Ligt, and he is listening. Worth noting, though, that De Jong had similar with PSG (and was close) before eventually doing what everyone expected and signing for Barca.

United are in desperate need of a top quality centre-back and a leader, and De Ligt appears to be the full package, at just 19! United’s recent transfer trend has seen a Galactico-style approach to signings, and although De Ligt would continue that pattern, this time it’s different. He is a player who we actually need with world-class potential, someone to improve the team, and a player who would be the bedrock at the back for many years to come.

He’s already a top class defender, a born leader, and would be able to slot seamlessly into our most problematic position alongside Victor Lindelof.

His Ajax side convincingly reached the Champions League semi-finals this season. They were beaten in dramatic fashion by Tottenham, who take on Liverpool in the final in Madrid next weekend.

Having made his debut for both club and country at only 17, 2018-19 has been the young Dutchman’s breakthrough season, winning the Golden Boy award for the most impressive player in Europe during a calendar year, and scoring the decisive winner against Juventus in the Champions League quarter finals.

Delaney’s tweets also suggest that Barcelona need to shift some of their high earners before making such a signing. Let’s hope De Ligt gets impatient and decides to join United.

(To be fair, if anyone’s worth the investment it’s probably De Ligt. He’s not a Sanchez. He’s a teenager! But can slot right in, is already class, and in a key position.)

However, the mood changed on Sunday morning when Sky Sports ran a report claiming that United had ruled out a move for De Ligt.

This saga could take another few twists and turns.