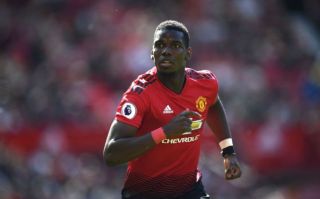 Juventus are reportedly making it very clear that they want to re-sign Paul Pogba this summer.

A report from The Express claims that the Serie A champions are willing to offer Manchester United two players in exchange for the World Cup-winning midfielder.

Left-back Alex Sandro and forward Paulo Dybala are both seemingly being offered as bait to try bring the Frenchman back to Italy.

Pogba has fond memories from his time in Turin – where he became a top footballer and earned a mega money return to Old Trafford, which, let’s face it, hasn’t been much of a success.

Stretty News understands that Pogba wants to leave United this summer, with Real Madrid also said to be interested, as per the Daily Star. Now the Spanish giants will fear that their pursuit to sign the former Juventus man could be hijacked by that very club.

And while I think the ship has sailed for Sandro to join United, Dybala could offer a creative spark in the final third if Pogba ends up leaving.

Dybala would also come in as a readymade star and should be eager to get his career back on track after a difficult campaign with Juventus because Cristiano Ronaldo’s arrival saw him slip down the pecking order a bit.

I’d say the Argentina international’s future depends a lot on who comes in to replace former manager Massimiliano Allegri.

But let’s see what happens. The Independent has also linked United with a move for Atletico Madrid’s Antoine Griezmann after reopening talks with the forward’s entourage.