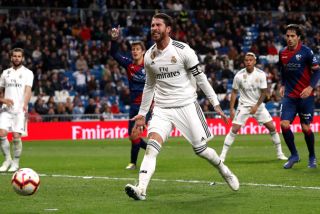 Reports of a fall out between Sergio Ramos and Real Madrid president Florentino Perez has put the Spanish media in a bit of a frenzy.

Spanish outlet AS claims the captain is having a re-think about his future and may soon leave the club he’s spent 14 years with.

Apparently the feud between Ramos and Perez boils down to how the president ranted at the players after the final La Liga game of the season, which led to the Spain international hitting back.

“I’ve given everything and I’ve broken my face for this club and for you, but if you want to throw me you pay me and I’m going,” he is alleged to have said, as per AS.

Rows like that tend to be heat of the moment spats and usually end with the player being interviewed about how great the club is, along with the bright future it has… oh, and ‘thanks for the bigger and better deal’ to go along with that.

If Ramos was available to buy this summer there wouldn’t be a shortage of interest in his signature – but the Spanish press has focused on interest from four clubs in particular.

Manchester United, Liverpool, Juventus and an unknown Chinese club are reportedly all interested.

There’s no denying that United need reinforcements at the back and Ramos is one of the best out there!

And, while Liverpool fans would begrudge the likelihood of Ramos joining them, it’s a ridiculous claim after all the controversy that followed last season’s Champions League final when Ramos took Mohamed Salah for a ride and the Egypt international missed the rest of the game, leaving the pitch in tears.

Ramos is still one of the best defenders in the world and I think every club would have room for a player of his calibre. On paper few are better but he’s 33-years-old and that could be a reason for Real Madrid to cash in now.