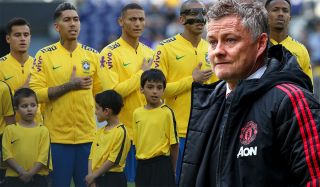 Richarlison could be on the move this summer after an impressive debut season at Everton and reports claim he wants to stay in the Premier League.

The Brazilian linked up with his former Watford manager, Marco Silva, at Goodison Park and it was no wonder why the Portuguese coach wanted to reunite with the forward.

Richarlison, 22, scored 14 goals and provided two assists in 38 appearances across all competitions.

He has an aggressive spark to his game — one that I encourage and enjoy as a spectator. Manchester United lack players with that in their DNA.

And, it promises to be a busy summer at Old Trafford after a bitterly disappointing campaign which saw the Reds finish sixth in the Premier League.

Manager Ole Gunnar Solskjaer must do all he can to sign the right players and ensure he gets the best out of them from the minute next season kicks off. The media hounds will be out in their droves to pile the pressure on, but an early winning run and attractive football would quieten some of the talk suggesting Solskjaer is not the right man for the job.

The Express notes how several targets have already been touted with Solskjaer, like any football manager with a brain, looking to get his business done quickly. That way he can get an early look at them together for pre-season preparations and build on the team chemistry.

Nobody knows yet who we will end up with this summer, but The Sun claims United are interested in Everton’s Richarlison, although the Toffees are likely to demand £100m for his signature.

United won’t pay that. They would be stupid to!

Then again, anything is possible with Woodward at the wheel…