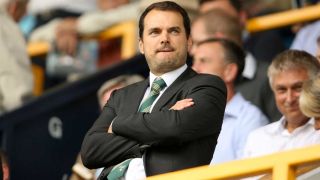 Manchester United are said to be considering Norwich City director of football Stuart Webber to fill their technical director role.

The reports originate from The Sun claiming that Webber, who can take some of the responsibility for taking Norwich back to the Premier League, is in contention for the job at Old Trafford. He also worked at Huddersfield during their promotion to the top-flight.

NEXT: Transfer duel: Man Utd battling Arsenal for French midfielder on a Bosman

Webber would oversee the rebuild of the club which is going to be a massive job should he get it.

Manchester Evening News add that Ed Woodward is also working on putting together a transfer committee which should be made up of Webber and some former players.

We still have no idea exactly how this will work or if Woodward will have as much involvement, but this is Manchester United in 2019 and you’re probably best to fear the worst.

It would be good if Webber came in to work with Solskjaer to identify the best players to help the club progress after a bitterly disappointing sixth-place finish last season.

Former players Darren Fletcher and Rio Ferdinand have both been tipped to be part of the transfer committee.