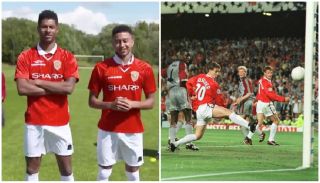 Jesse Lingard and Marcus Rashford attempt to recreate one of the most iconic goals in Manchester United history, fittingly scored by manager Ole Gunnar Solskjaer.

The Norwegian will enjoy watching two of his stars try recreate what was without question the greatest goal of his career. Few players have witnessed anything like it.

A corner kick sent in by David Beckham, knocked on by Teddy Sheringham and converted by a stretched Solskjaer. That’s how Manchester United reached the promised land.

BT Sport did the feature with the United duo, and in a 2 minute video you see their best efforts.

Eventually they recreate the goal and Lingard does a knee slide celebration, similar to how Solskjaer reacted to his winner 20 years ago. The England international hurt himself in the process — complaining about a scab on his knee and almost requesting a medical treatment until Rashford set him straight.

Watch below as the lads recreated one of the beautiful game’s most iconic goals.

Jesse Lingard and Marcus Rashford attempt to recreate one of the most iconic goals in Man Utd history 🔴⚫️ pic.twitter.com/OMUnxxBOEQ