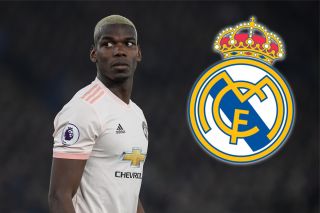 Manchester United view Paul Pogba as their most prized asset for commercial reasons. He is also one of the best midfielders in the world on his day, however seldom that is, and their stance this summer is that he’s not for sale.

But the latest odds from 888sport have him as evens to join Real Madrid this summer, as reported by the Manchester Evening News.

NEXT: Ex-Man Utd star Mickey Thomas gets the all clear after being diagnosed with cancer in January

According to Miguel Delaney, writing in The Independent, Pogba is “very keen” to leave United and wants to sign for Real Madrid. The report from May 1 states that the France International feels that the club will not challenge for the league title in the immediate future, and this has led him to considering his future.

Stretty News learned back in 2016 that Pogba was persuaded to join United as a stepping stone to one of the top Spanish clubs. It’s funny how things work out — just three years on — but were United any closer to challenging for a title then?

José Mourinho just got the job and I guess there was optimism around that. Without question more than there is now. His relationship with Pogba got so bad he stripped the Frenchman as captain and dropped him for a number of games.

Pogba, who turned 26 last month, is probably of the view he doesn’t want to spend his best years at United, a club not winning or competing for league titles or in the Champions League.

The Reds broke the world transfer record to bring Pogba back to Old Trafford in August 2016. They will seek profit for his signature because of his commercial power, while he performances on the pitch could be a lot better.

A sale could suit all parties.