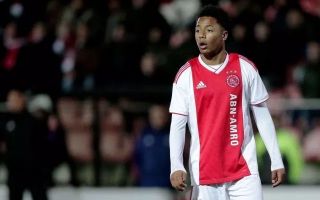 Manchester United may not be at the peak of their powers right now but it seems the club still has the ability to flex its muscle in the transfer market.

That’s because, according to The Sun, United are set to sign Ajax wonderkid Dillon Hoogewerf despite the Dutch club’s best efforts to keep him.

Ajax’s head of youth education Said Ouaali was quoted by The Sun as saying: “Dillon has indicated last week that he will leave the club.

“He is leaving for a foreign club. We wish him a lot of success and know that we have done everything to keep him.

“He may ultimately make the choice and choose a foreign adventure.”

Hoogewerf is a 16-year-old forward who can play centrally or on either flank.

He scored 10 goals and provided six assists for Ajax’s youth side this season as they came second in the Under 17 Eredivisie.

Hoogewerf also represented Ajax in Europe by turning out for their Under 19 outside in the UEFA Youth League.

Ajax have a superb reputation for taking youngsters from their junior side and making them first-team stars, so Hoogewerf’s decision to leave at such a tender age seems bold.

But United have famously adopted a similar policy in the last few decades and perhaps he could be fast-tracked at Old Trafford.