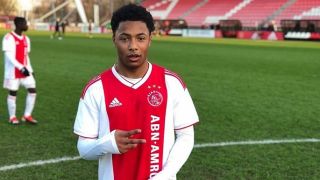 Manchester United are making moves to complete the signing of Dutch wonderkid Dillon Hoogewerf, according to The Metro.

The report states how Hoogewerf has decided to leave Ajax and is expected to join United in the coming days.

NEXT: Man United to use transfer muscle to poach teenage star despite club’s best efforts to keep him

Hoogewerf, 16, is seen as one of the best attacking talents in Ajax’s youth academy.

This season he scored 10 goals and recorded six assists for the Under-17s.

He also made his mark for the Under-19s and in the UEFA Youth League, which is where United scouts probably had more of a chance to take a look at him.

The video below shows his highlights from last season. A taster of what we can expected when or if he completes his switch to Old Trafford.

He appears to have plenty of technical ability, always looks to cut in from the right flank and enjoys an attempt on goal.

Head of Youth Education at Ajax, Said Oualli, confirmed to the club’s official website: ‘Dillon has indicated last week that he will leave the club.

‘He is leaving for a foreign club. We wish him a lot of success and know that we have done everything to keep him.

‘He may ultimately make the choice and choose a foreign adventure.’