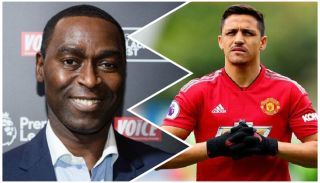 Alexis Sanchez is not a popular figure at Manchester United. After arriving 18 months ago, he instantly became the club’s highest paid player and ultimately flopped. Now Ole Gunnar Solskjaer probably hopes the Chile international finds a new home this summer.

The Express claim Inter Milan and Juventus are both interested in signing Sanchez this summer, which would be ideal for all parties involved.

But not everyone thinks Sanchez is a washed up footballer just yet. Andy Cole is refusing to give up hope on the former Arsenal man, despite his struggles since joining United.

“That’s the million dollar question because there’s noises that he might not be there, whatever,” Cole told PA when asked if Sanchez will come good next season, as quoted by the Manchester Evening News.

“Sanchez is a bit like the Torres thing. You know, when Torres left Liverpool and went to Chelsea, all of a sudden he wasn’t the same individual and left everyone scratching their head.

“I think the situation with Sanchez now has got everyone scratching their head.

“For what he was at Arsenal and then coming to Manchester United, you turn and say, ‘well, where has it kind of gone wrong?’ Because you can’t become a bad player overnight. You cannot do it.

“If it’s at Manchester United we’ll have to wait and see but you can’t become a bad player overnight because he has too many qualities.”

Cole’s right about everyone scratching their head over Sanchez, but I’d like to see what gives him the impression that it’s no a sign of a player no longer being good enough for the highest level?

He looks finished and I think United now just accept it was a bad piece of business.

The deal Sanchez is on has also caused a bit of a rift in the dressing room and understandably so… How is he our highest paid player when he’s done so little for the club? That’s a slap into the face for some of his teammates, whether you agree with their stance or not.

Cole knows what it’s like to bounce back from dry spells, but this feels like more than that. It’s gone on for 18 months!