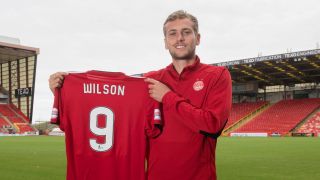 Aberdeen are reportedly keen on signing James Wilson on a permanent contract this summer.

The striker has spent the season on loan from Manchester United where his contract is set to expire in June.

NEXT: Ex-Man Utd star Mickey Thomas gets the all clear after being diagnosed with cancer in January

It’s likely that United will soon confirm Wilson as one of a number of players released.

This makes it easier for Aberdeen to strike a deal — on a Bosman — should Wilson decide to extend his stay at the SPL club.

According to the Evening Express, Wilson would need to take a pay cut to sign for Aberdeen as he is said to be on £30,000 per week at United. They also claim the Scottish club could offer only a fraction of that figure.

There were high hopes for Wilson when he was coming through the youth academy. Ryan Giggs gave him his Premier League debut, but the lad just never had luck with injuries and really struggled to kick on.

Some of his loan spells were a complete waste of time but hopefully something positive comes from his potential switch to Aberdeen.

The report adds that Wilson is giving a return to Aberdeen some serious thought.