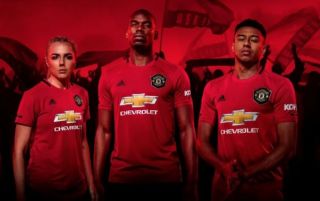 Adidas have released the promo video for next season’s home kit.

Paul Pogba, Jesse Lingard and Marcus Rashford all feature along with members of the Manchester United Women’s Team, who had a better season on the pitch than the men.

Both teams will wear this shirt as part of the home kit for next season and it has been released as a tribute to United’s European Cup triumph in 1999.

Ole Gunnar Solskjaer, who scored the match winning goal in stoppage time, features in the video speaking about those final three minutes. United clinched two goals to come from behind and beat Bayern Munich in the final.

Oh what a night!

It will be 21 years on from that night in Barcelona when the players start wearing the next kit — prompting questions as to why it wasn’t the main design concept for last season, with a 20th anniversary being a more significant milestone.

Not that it matters too much – the lads can wear black paper bags next season for all I care. The attitude needs to change on the pitch before we can expect better results.

Towards the end of last season it looked like the players couldn’t care less. And Champions League football was still on the line.

Watch the promo video below, via @adidasfootball.