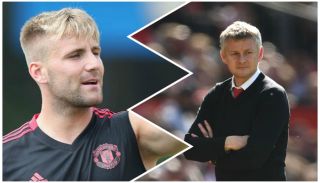 According to the Daily Mail, Ole Gunnar Solskjaer has warned his first-team players that anyone who returns for pre-season overweight will risk missing out on the club’s tour of Australia, Singapore and China.

The manager knows he has a big enough battle on his hands as it is after missing out on the top four last season, though that wasn’t completely down to him. Solskjaer was part of the reason United got back in with a chance of qualifying for the Champions League — not to mention the incredible comeback win against Paris Saint-Germain in the last 16.

One player already trying to show a good initiative is Luke Shaw, who the Daily Mail claim has been training at Carrington this week on his own to get a head start on his teammates for pre-season.

The 4-3-3 high pressing system Solskjaer came in with didn’t last till the end of the season and it always puzzled me why we stopped going that, given we went on an incredible winning run doing so, but perhaps we were limited with a bunch of players lacking in fitness.

It’s unacceptable for professional footballers at this level to be unfit at that stage of the season, but Shaw singling himself out is interesting because he’s a player we know has struggled with fitness in the past.

He hasn’t always been in the best shape either, which is why José Mourinho started losing patience with the England international in the first place. Shaw then turned things around last season by cementing his place at left-back, however, a number of shoddy displays towards the end of the season has made people think twice.

At times the former Southampton full-back switches off or looks guilty of being lazy on the pitch. United fans won’t tolerate that for much longer so Shaw must improve again next season, which has me thinking he is best getting all the work in he can before his teammates start pre-season preparations.

It’s very early to be training with the season just finished, but it’s not as if we saw many of the players putting a shift in every week, is it?

Shaw won United’s player of the year too, though that’s probably not something to gloat about this past season, with most players massively underperforming.

Our double winning Players Player of the year and Player of the Year, Luke Shaw, has been left out of England’s nation league final’s squad. Tells you everything about how awful our team were this season.

Reporter Simon Jones adds that Solskjaer is looking to make changes with fitness staff instructed to plan a regime that will help the squad maintain a hight energy pressing game throughout the season.

Shaw is supposedly taking one of United’s fitness coaches on holiday to ensure he stays fit and part of Solskjaer’s plans.