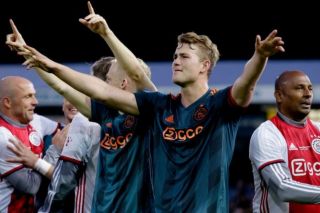 Manchester United have been linked with a move for Ajax captain Matthijs de Ligt, but it has always felt as though he will end up at Barcelona.

They win the league most seasons, compete for the Champions League and have some of the best players in the world. You can see reasons why Barça would be deemed a more attractive destination and we’ve not even mentioned the weather.

Sport Witness, our translating friends, have pulled two reports on De Ligt from Spanish outlet Sport. The first came on May 22 when it was suggested that Barcelona were not optimistic about sealing a deal for the centre-back because he has received better proposals elsewhere.

There are also suggestions that Barça won’t meet the demands set by De Ligt and his agent Mino Raiola, who the La Liga club know all about from their dealings in the past with players such as Zlatan Ibrahimovic.

However, Sport now claims United are ‘one of the top contenders’ to sign the Netherlands International.

Two weeks ago, De Ligt rejected a 5-year deal from Man United worth €14m per season. United have since gone back with a significantly improved offer and are considered a top contender to sign him this summer [Sport via sportwitness] #mufc pic.twitter.com/RmaaMUS7jF

The 19-year-old is arguably the best young defender in world football right now after a tremendous season for Ajax, which saw the Eredivisie side reach the semi-finals of the Champions League, losing in dramatic fashion against Tottenham Hotspur.

Sport add that United have improved their offer from two weeks ago, alleged worth €14m per season, which he reportedly turned down.

De Ligt still has to respond to United’s second offer.

United fans have long become fed up with the likes of Chris Smalling and Phil Jones stealing a living at the club. They’re just not good enough but continue to get game time and, even worse, bigger and better contracts!

This is a perfect opportunity for manager Ole Gunnar Solskjaer to build from the back with a world-class defensive addition. De Ligt won’t come cheaply – but United should always be looking to sign the best young players in the world.

De Ligt has a bright future at club and international level.